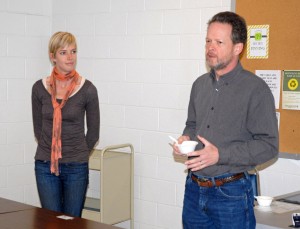 Vance-Granville Community College graduate Ariel Greenwood was back on campus recently discussing how her experience as a North Carolina State University student could be applied to the community college. On Jan. 24, Greenwood was the guest speaker at a “lunch and learn” session organized by the VGCC Sustainability Committee.

Greenwood, a former resident of Kittrell, first enrolled at VGCC at age 16 before graduating with an Associate in Arts degree in 2010 and transferring to N.C. State. At the university, she has been involved in managing a community garden called Students for Organic, United Living (SOUL). Greenwood credits her time at VGCC, at least in part, with first sparking her interest in sustainable agriculture. “As a new student at Vance-Granville, I didn’t know many people and I wanted to get involved, so I joined the Ecology Club,” she recalled. One of the club’s first field trips was to Melvin’s Gardens in the Rocky Ford area, which was so impressive to Greenwood that she later volunteered and worked there. She was also employed as a farm hand on a private homestead in Johnston County for two years. It was only natural that once Greenwood moved on to the four-year university, she would want to pursue similar interests. She explained that the SOUL garden on NCSU’s Centennial Campus is tended primarily by students. Garden volunteers may take home some of what they help to grow, and the rest is donated to Raleigh’s Inter-Faith Food Shuttle. “It may sound like a cliché, but working in the SOUL garden can often be a transformational experience for students,” Greenwood said. She thinks the model of a community garden (defined as any piece of land gardened by a group of people) could work on the VGCC campus as well. “A community garden allows for hands-on learning and gives students opportunities to take initiative and be creative,” Greenwood said. “It can also be a place where students can get some healthy physical activity, get to know one another, and even just reflect and think, which is right in line with the purpose of any educational institution.” A campus garden would also be a teaching tool for science and sustainability classes. “Not only do sustainable agriculture initiatives reflect well on any school, but also, jobs are growing in this field, so the time is now,” Greenwood said.

Since August 2012, Greenwood herself has been employed as a culinary farmer at SAS Institute in Cary. At the company’s one-and-a-half-acre sustainable farm, she uses her skills to grow produce for SAS employee dining facilities and for local restaurants. Greenwood is set to graduate from NCSU in May with a bachelor’s degree in Psychology and a minor in Agroecology.