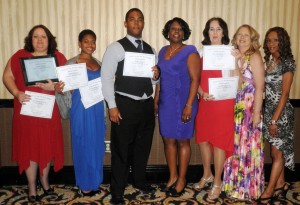 Two students placed high enough to qualify for the national PBL competition, to be held in June in Anaheim, California. They were Diane Power of Oxford, who placed second in the “Client Services” competition, and Theresa Chiplis of Norlina, who placed first in the state for “Future Business Executive.” Power also won fourth place in “Business Communications” and Chiplis placed seventh in “Public Speaking.”

Other VGCC chapter members who scored well included the duo of Jessica Sutton-Corrodus of Oxford and David Henry of Macon, who won third place in “Emerging Business Issues.” Sutton-Corrodus as an individual also placed fifth in “Job Interview.”

For the fourth consecutive year, the VGCC chapter was recognized for the largest Professional Division membership (established business professionals and educators) in the state. VGCC had the fourth-largest overall chapter membership as well. The chapter also won the Terry Lowrance Leadership Award for an outstanding year of local, state, and national activities, and was recognized for contributing to the March of Dimes and to the NCPBL Professional Division Foundation, Inc. General and Scholarship Funds. Five-year service anniversary awards were presented to VGCC chapter adviser LaTonya Steele, a Business Administration instructor, and co-adviser Carl Hann, the program head for Business Administration, Accounting and Entrepreneurship.

Phi Beta Lambda is the national organization for college students who are preparing for a variety of careers in business. For more information, call LaTonya Steele at (252) 738-3447.