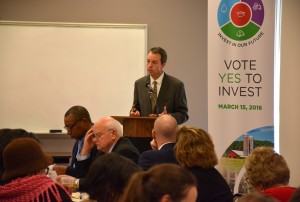 Among those in attendance were community leaders from Vance, Granville, Franklin and Warren counties, VGCC trustees and officials, and a representative from Piedmont Community College in Person County. The event was one of 22 such educational meetings being held across the state in advance of the vote on the bond, which is set for March 15.

Among the featured speakers was Dr. Travis Burke, the interim associate dean of the College of Agriculture and Life Sciences at NCSU and interim director of N.C. Cooperative Extension. Burke explained that, if approved by voters, the Connect NC Public Improvement Bond would benefit agriculture, higher education, parks, the N.C. National Guard and other public services, without requiring an increase in taxes. “The state is growing and has infrastructure needs,” Burke said. “We have added two million people since the last statewide bond referendum in 2000.”

The North Carolina Community College System would receive $350 million from the bond. That includes a little more than $7.6 million specifically for VGCC, which could be used for construction, renovation and repairs across the college’s four campuses. Only seven of the state’s 58 community colleges would receive more funding than VGCC.

“The community college system is one of the state’s crown jewels, not only for education but also for economic development,” said Dr. Marshall Stewart, also of N.C. State University’s College of Agriculture and Life Sciences, at the meeting. Stewart provided a breakdown of investments that the state would be able to make if Connect NC is approved. More than half of the proceeds are earmarked for higher education, including 49% for the University of North Carolina system and 17% for community colleges. The remainder is divided as follows: 16% for water/sewer projects and local parks; 9% for agriculture; 5% for state parks (including Kerr Lake) and the North Carolina Zoo; and 4% for public safety.