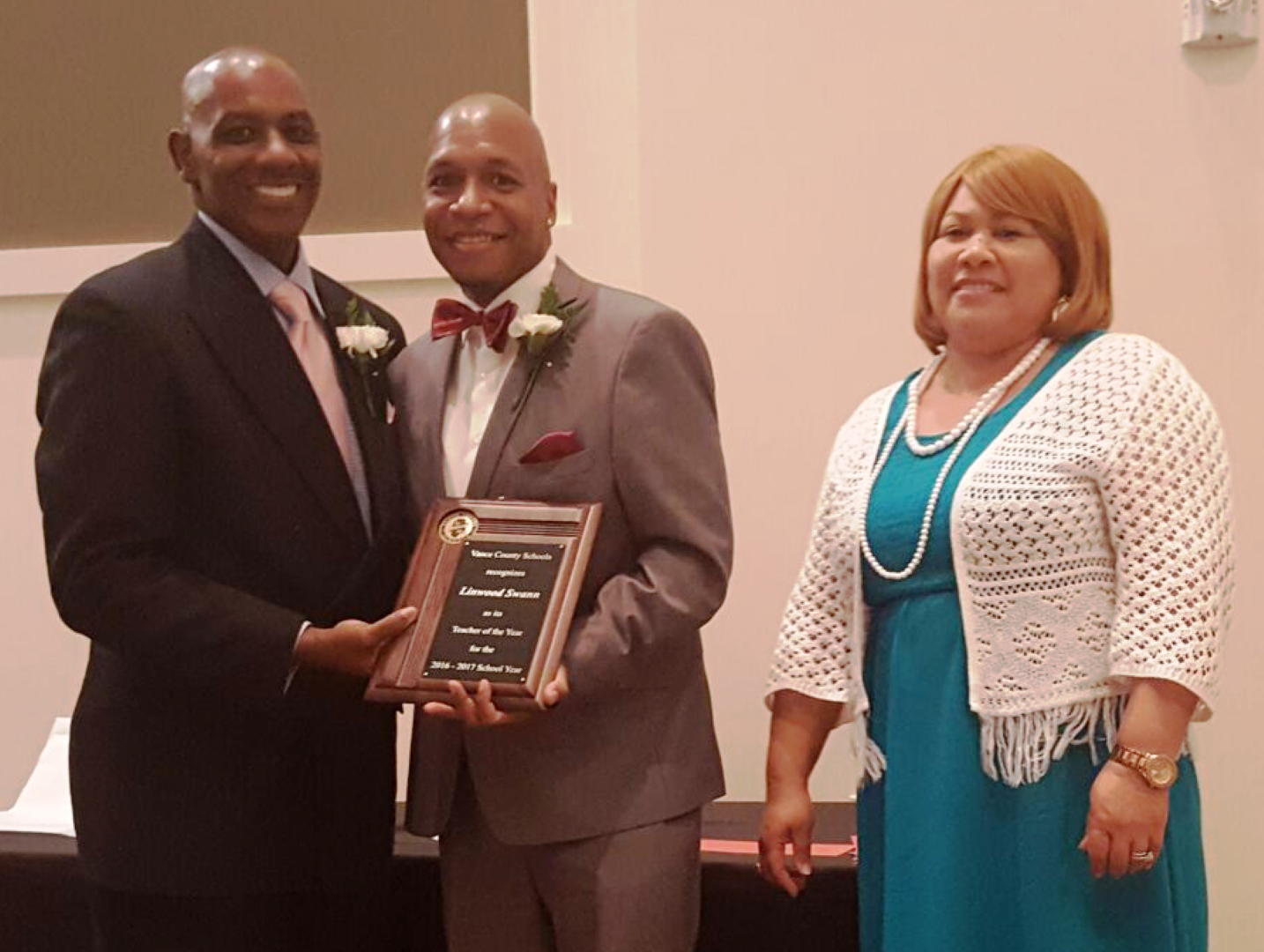 Approximately 120 school officials, educators, family members and other invited guests attended the event, which was held in the McGregor Gallery between the Perry Memorial Library and McGregor Hall performing arts center on Breckenridge Street in Henderson.

Swann was selected from an outstanding field of 16 top teachers in the district who each serve as their school’s Teacher of the Year. Each received a commemorative gift from the school system for their recognition and Swann was presented with a 2017 Toyota Camry, which is generously provided by Dave Genetti and his dealership, Toyota of Henderson. Swann will drive the vehicle for the next year as the district’s Teacher of the Year.

Swann is an English/language arts teacher at Eaton-Johnson Middle School, where he has worked as a faculty member since August of 2010. He began his career in teaching in 2007 with Brunswick County Schools. He has been a leader among the faculty members at Eaton-Johnson since he began work at the school. Swann is very involved in extra-curricular activities for students, as well. He notes that his teaching philosophy is two-fold.

“As well as advancing children’s learning toward the achievement of academic excellence, I believe in promoting the development of their character,” Swann writes. “I work to achieve this by applying creative and dynamic teaching techniques that take into consideration curricular objectives, learners’ needs, diverse learning styles and teacher modeling. I aim to develop a rich resource of expertise, experience and materials that, when effectively put to use, motivate and engage my students.

“I feel it necessary to create a collaborative relationship between the home and the school, so we can work more effectively toward a common goal,” he added. “Personally, I want to approach educational challenges with optimism to ensure continual improvement and growth as a lifelong learner, continually acquiring and developing new knowledge and skills to benefit my students.”

Crystal Richardson of Clarke Elementary School, center, accepts the 2016-2017 VCS Principal of the Year plaque from Jackson and White.

Richardson was among three nominees for the district’s Principal of the Year. Additional nominees honored were Kristen Boyd of Aycock Elementary School and Stephanie Ayscue of Southern Vance High School.

Under Richardson’s leadership, Clarke Elementary has made significant academic gains over the last few years. She notes in her philosophy of instructional leadership, “As principal, it’s crucial to provide effective resources for my staff as well as their request in some instances to need additional resources to achieve effective teaching for a conducive learning environment. During our instructional meetings or workshops, it has been important to stress communication as the key element and/or belief that all students are capable of learning regardless of their weaknesses or disabilities. Also, with equipping students and teachers with the sufficient resources, it creates empowerment, motivation and inspiration for both parties. However, from a leadership perspective the ultimate goal is trust in a manner of complete investment in the learning process along with an effective and dedicated staff.”

Joy Suther of Dabney Elementary School, center, accepts the 2016-2017 VCS Assistant Principal of the Year plaque from Jackson and White.

At Dabney, Suther stresses that her role is to support Dr. Michael Putney, the school’s principal, all faculty and staff members and the students as they work together to achieve academic excellence. Suther says she takes particular pride in working directly with teachers, especially in kindergarten through second grade, to use innovative strategies and technology to enhance classroom instruction. She says she is always looking for new approaches to assist teachers in all grade levels to effectively reach every child with daily instruction, to assess student achievement and use available data to determine how to help students be successful.