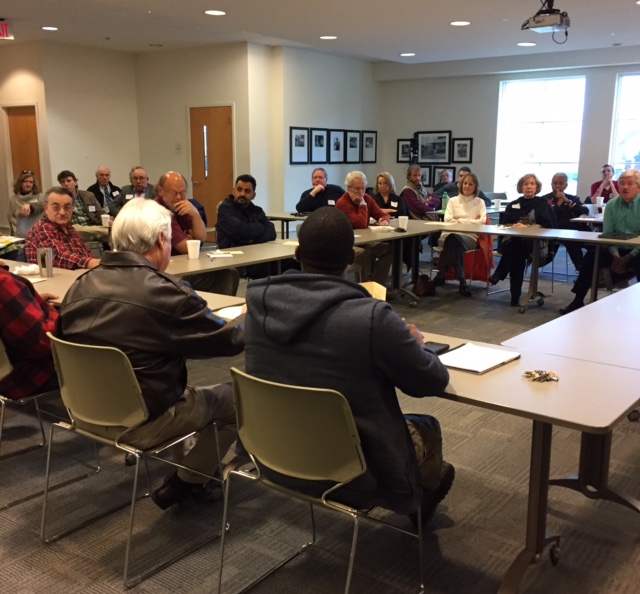 The Henderson Vance Downtown Development Commission held a State of Downtown meeting on February 9th, 2017 in the Farm Bureau Room of the Perry Memorial Library in Henderson, NC.

The purpose of the meeting was to raise awareness of the programs and accomplishments by the HVDDC in 2016, plans for 2017, and gather feedback from downtown business owners of issues.

Speakers and topics were

After each committee went over their accomplishments, and plans for 2017 were discussed, a question and answer session took place.  Questions included progress on entering North Carolina Main Street program, garbage cans on the street, sidewalk and curb problems, and how to measure the success of the programs.

A complaint was made that the sidewalks and curbs can be degraded, mismatched in some areas.  City staff acknowledged the issue and committed to looking into the problem.

A question was asked how do we measure the success of the programs.  We do not have historical foot traffic data, nor do we have a way to collect foot traffic data.  Sales tax revenue reports from the state do not break down just the downtown area.   We can ask a survey from the downtown merchants of revenue for the last x years.  However, we do not feel business sales are fair way to judge the work we do in awareness and advocacy of our downtown.  We can report attendance at events, which we are holding numerous events, continuing old events, and also having new events each year.  Attendance at those events relates to foot traffic, and as said in the meeting, the HVDDC’s goal is to get people downtown, but it is the business owners responsibility to get them in the stores and purchase.  We have a facebook page in which we help showcase businesses and events in downtown, and that page now has over 750 likes.

The HVDDC requires community support.  If you would like to help on any of these issues, or have your own passion about downtown, let us know and we can get you to the right group! We need your help, whether that is your time, materials, or funding.  Email us at info@hendersonncdowntown.com

To find out more about the Henderson Vance Downtown Development Commission visit their website at www.hendersonncdowntown.com

Video services for the meeting were provided by Dataforge.

Catering services for the meeting were funded by the HVDDC and provided by Emporium Food and Spirits, a new restaurant soon to open in the old Uptown Rose building.