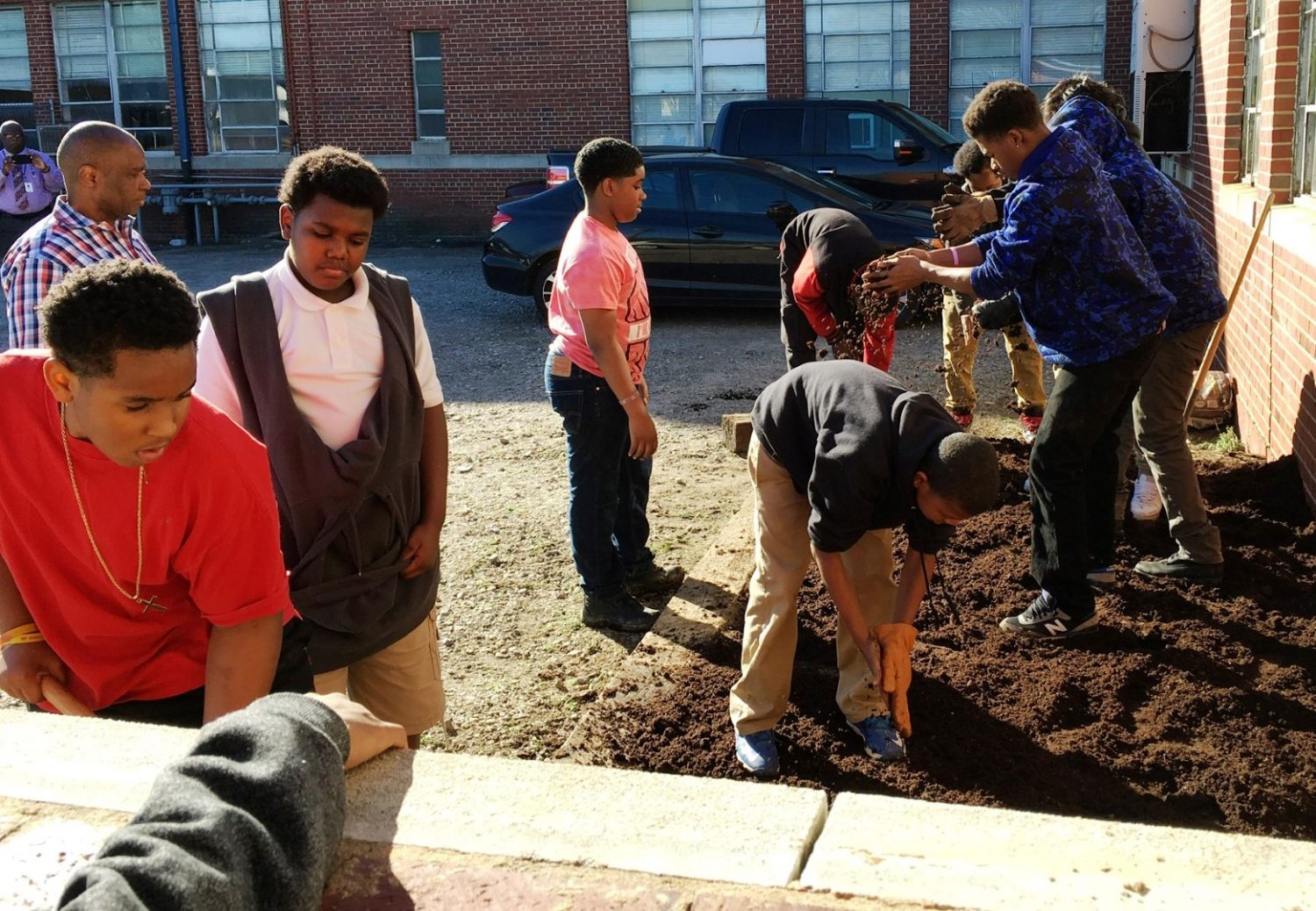 Administrators and students at the Vance County Schools Empowerment Academy have created a garden outside of the facility’s main entrance with funding from a special grant program.

The grant funding, totaling about $170, came from the Karma for Cara Foundation which funds youth volunteer projects.

Brian Schlessinger, a teacher at the Empowerment Academy, led efforts to apply for the grant and create the garden. He worked with his students and administrators at the academy to seek the grant funding and follow through on building the garden that is beside the facility’s main entrance.

The garden was completed by early February after students and their teachers worked to prepare the soil, install landscaping timbers for borders for the garden and had soil brought in to fill the space. They then worked to plant tulip bulbs, two evergreen shrubs and a cedar tree in the garden.

Student Antavius Turner with Brian Schlessinger as they work online to complete paperwork for the grant funding.

Antavius Turner, a seventh grader who was attending the Empowerment Academy and is now a student at Eaton-Johnson Middle School, was one of the students involved in the project.

“Building the garden was a really good experience,” Turner said. “All of us in the academy worked together to get it done. We wanted to give the area outside the building life and make it look nice. We really like how it turned out and I think the project helped to show when you give us another chance we can do good things.”

The four female students and 10 male students who attend the Empowerment Academy are all on long-term suspension from their home schools because of behavior issues. Girls attend classes at the academy in the mornings and the boys attend their classes in the afternoons each day. Schlessinger and other teachers, along with Dr. Ralphel Holloman, coordinator of the academy, work with the students in online course work as well as teacher led math and language arts classes on a daily basis. Turner spent the first semester of this school year in the Empowerment Academy. He was able to return to Eaton-Johnson for the beginning of the second semester in late January after he completed necessary course work and met attendance and behavior requirements.

Brian Schlessinger and students are shown as they work on the garden.

“All of the Empowerment students pitched in to help with the garden project,” Schlessinger said. “It made them feel good to have a role in creating it. We hope to do more with the garden at a later time and continue to improve the appearance of the areas outside of the building.”

Schlessinger pointed out that the funding from the Karma for Cara Foundation was a perfect fit for the academy’s project. The foundation was established in memory of Cara Becker, who lived in Maryland and at the age of 21 was diagnosed with leukemia. She battled the disease for four months, but died of complications from her treatments in December of 2012. Her family has carried on her legacy through the foundation. Becker throughout most of her short life was involved in volunteer work and community service. She had a special interest in helping children who were experiencing tough times and promoted community involvement with those her age and beyond. The foundation regularly awards small grants for community projects involving youth groups and also recognizes the efforts of youth who reach out to help their community.

Image Information: Brian Schlessinger and students are shown as they work on the garden.