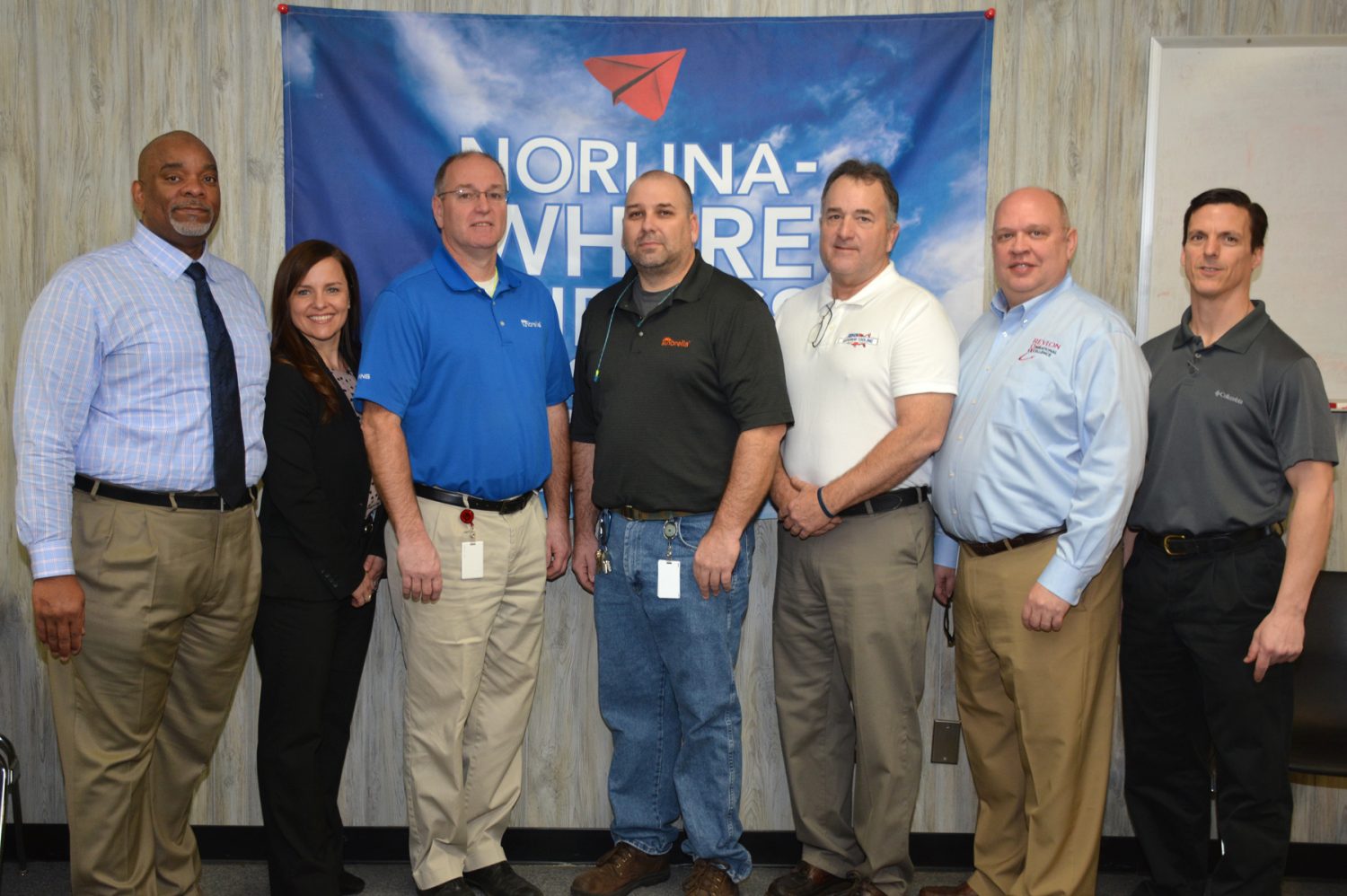 The Glen Raven, Inc., site in Norlina recently became the third area manufacturer to join Vance-Granville Community College in the North Carolina Triangle Apprenticeship Program (NCTAP), a partnership that seeks to provide new opportunities for local students and to prepare a skilled workforce.

Typically starting in the 11th grade of high school, NCTAP is a four-year program that leads to a student obtaining an associate degree at the community college and paid, on-the-job training at the participating employer. Eligible students’ VGCC tuition will be covered by a waiver from the state of North Carolina. After they graduate from high school, students in the program will be employed full-time by the company.

NCTAP works to recruit, select and induct the participating students, Earnhardt explained. “This is a successful program at helping companies find the right people to fill their jobs because of the rigorous selection process,” he said. “We find students who are responsible and dedicated.”

Earnhardt said that NCTAP was inspired by a similar apprenticeship program in Charlotte. “Apprenticeship programs are really taking off all over the country,” he noted. “We’re currently trying to find more partners and to communicate the value of apprenticeships to high school students and their parents. We know that students who are accepted will eventually help spread the word to their classmates about this opportunity for a debt-free education coupled with a good job.”

Todd Wemyss has been the Norlina site manager for Glen Raven since 1998, and said that this would be his plant’s first experience with apprenticeship, but not his company’s. “The company has apprentices at other locations, both domestically and internationally,” Wemyss explained. Their plant in Burlington has an apprenticeship program, for example, and Glen Raven is interested in expanding such partnerships.

“We have very specific types of equipment here, so one advantage of the program is that an apprentice would be able to come in and learn how to use this particular equipment and be ready to work,” Wemyss said. “That kind of knowledge is difficult to find. This apprenticeship program would broaden our in-house technical capabilities.”

Wemyss serves on the VGCC Endowment Fund board of directors and lauds the longstanding partnership between his company and the community college. “Over the years, VGCC has helped us in numerous ways, including holding mini-seminars on site as well as both continuing education and curriculum courses that our employees attend.” He added that “Vance-Granville continues to help us move forward, and encouraging us to join the apprenticeship program is just the latest example. We’ve grown together.”

Wemyss said that September of 2017 is the earliest that an apprentice could begin the program. Shaler Chewning, a trainer/auditor for Glen Raven in Norlina, added that with many workers nearing retirement at his site, as well as broadly throughout the manufacturing sector, there is a growing need for new employees with various technical skills. Most likely, an apprentice at Glen Raven would enroll in the VGCC Mechatronics Engineering Technology program, which focuses on advanced manufacturing, which is becoming increasingly computerized.

Glen Raven has 40 locations in 17 countries. Headquartered in Glen Raven, North Carolina, the company has grown from a small cotton mill in 1880 into a global leader in performance fabrics. The Norlina location proudly displays the name of the company’s flagship brand, Sunbrella. A strong corporate supporter of VGCC’s Endowment Fund, Glen Raven has endowed several scholarships for students as well as annual awards that recognize faculty and staff excellence.

“We are excited that Glen Raven is continuing to build upon its partnership with VGCC by joining us in NCTAP,” said Ken Wilson, project manager for the TechHire grant at the college and a driving force behind the VGCC “Vanguard Apprenticeship Collaborative,” which is designed to cultivate highly skilled workers for large and small companies in a number of industries. He added that VGCC recently joined the national Registered Apprenticeship College Consortium.

For more information about the apprenticeship program, high school students and their parents should talk with their school guidance counselors or contact Ken Wilson at wilsonk@vgcc.edu or (252) 738-3259.