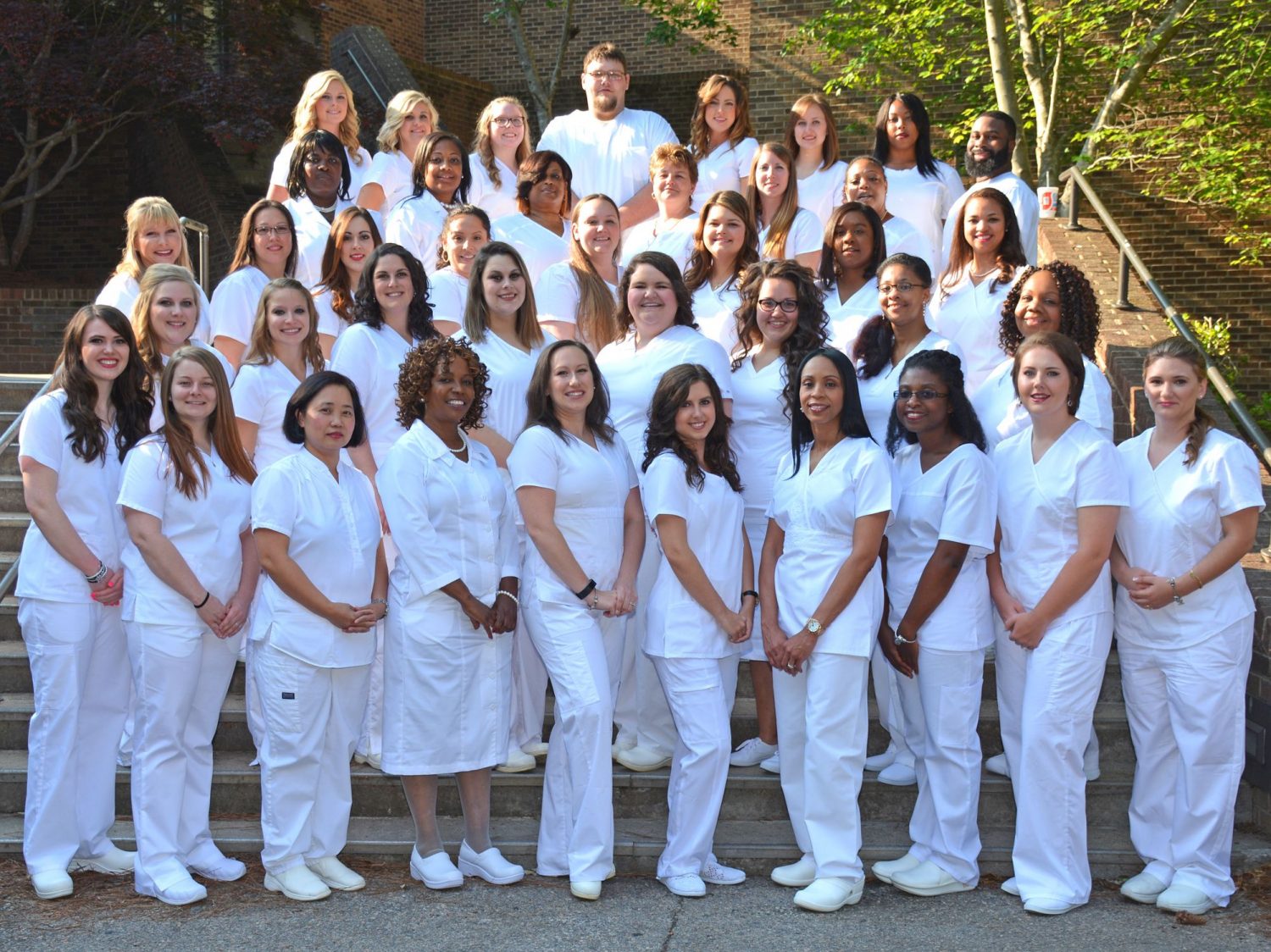 Vance-Granville Community College recognized 41 students who graduated this spring from the Associate Degree Nursing program with a pinning ceremony in the college’s Civic Center on May 10.

Among those honored with distinctive nursing pins at the ceremonies were seven who graduated through the LPN to ADN Transition Program, which helps Licensed Practical Nurses to continue their education and then become Registered Nurses. These graduates were Ashley Brooke Jones of Bullock; Brittany Mechel Champion and Martina Usher McKinnon, both of Creedmoor; Theresa Ann Channer of Durham; Kimberly Ramsey Ilupeju of Hillsborough; Heather Margaret Pipkin of Kittrell; and Jahid Kwaku Ross of Winston-Salem.

In welcoming remarks, VGCC President Dr. Stelfanie Williams congratulated the students on their success. “The class of 2017 is the most recruited class we’ve had in our history,” she said, noting that at least 26 had already obtained employment by the time of the ceremony. She thanked the graduates’ families and friends, as well as their instructors, for their support. “This occasion demonstrates the excellence of our esteemed Nursing faculty and the other faculty and staff who have educated, inspired and supported the graduates to this achievement,” Williams added. “Graduates, just as VGCC has made an impact on your lives, you will make a difference in the lives of others as registered nurses,” the president told the members of the class. “We are proud to have trained you for such a worthy endeavor.”

Class of 2017 President Brooke Hursey made welcoming remarks on behalf of her classmates as they reached the culmination of what she termed “a long and very difficult journey.” She thanked the graduates’ families and friends “for not allowing any of us to quit,” and their instructors, “for the education you have provided and the foundation you have helped us lay in nursing.” Hursey added that during the program, the class had become like a family and had overcome “huge obstacles.”

Student Heather Floyd presented a gift on behalf of the class to the VGCC Nursing department: a plaque engraved with a quote attributed to Florence Nightingale, “I attribute my success to this — I never gave or took any excuses.”

Academic honors were presented to graduates who completed the program with at least a 3.5 grade point average: Dyce, Enloe, Jackson, Jones and finally Sachs, who was recognized for having the highest GPA in the class.

Former VGCC Nursing instructor Tracey Hight, who now works for Granville Health System, served as guest speaker for the ceremony. “It has been a pleasure to work with each student who will be pinned tonight,” she said. “I am grateful to be part of your nursing career.” She offered three pieces of advice to the graduates.

“First, treat your patients like they were your family members,” Hight said. “Patients are people, our people, the people we feel called to help.” Second, she told her former students, “have no fear and believe in yourself. The career path you have chosen is wide open. Do not be afraid of change and the doors that may open for you. Continue your education, reach for the stars and know that the options are endless.”

Finally, Hight said, “You are ready to go into the world and become a nurse. As scary as that seems now, you have had education to prepare you. You’re ready to become the nurse you’ve always dreamed of. After you pass the NCLEX [National Council Licensure Examination] and walk into your new job as a nurse and receive the name badge that says ‘RN,’ your heart will thump with excitement and your stomach will fill with anxiety. Just look at that name badge and those letters RN and remember that Ms. Hight said you were ready.”

Instructor Heather Wilson described the significance of the nursing pin. The unique green and gold pin identifies each nurse as a VGCC graduate, and indicates that the graduate has the training and competence to serve as a professional nurse. During the ceremony, graduates were pinned by Associate Degree Nursing program head/instructor Anna Seaman, and received lamps and roses from instructors Julia Falkner and Dr. Markiesha Edgerton. Meanwhile, Nursing Department Chair Erica Jastrow read their biographies. After all graduates had received pins, the lights in the Civic Center were lowered, and instructor Crystal Senter led students in reciting the “Florence Nightingale Pledge” by lamp-light.