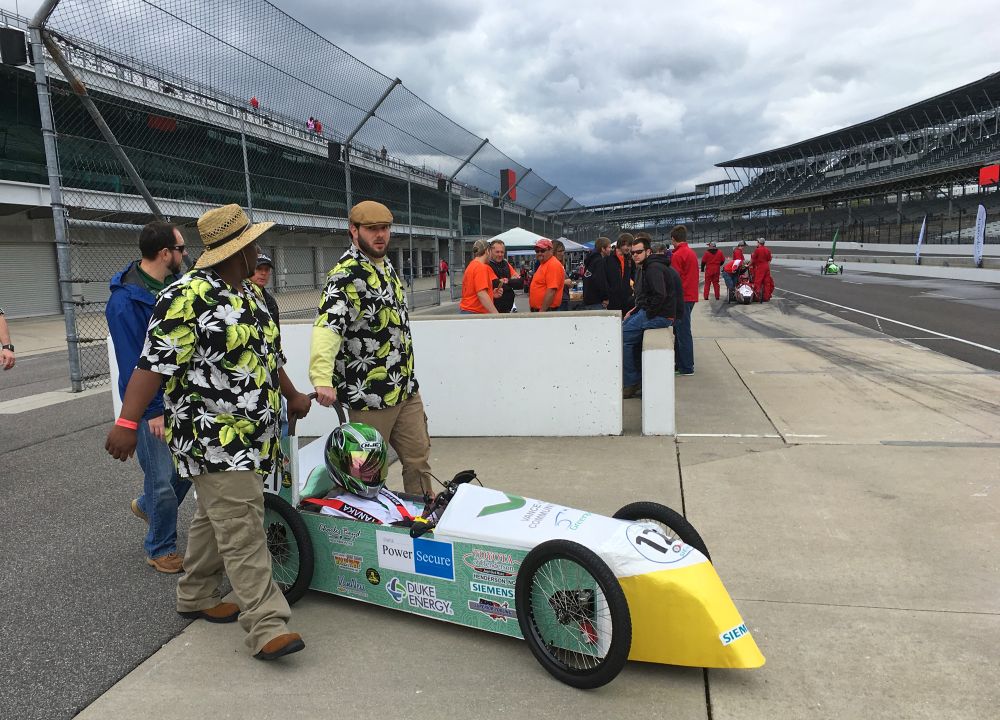 Teamwork is what got a group from Vance-Granville Community College onto the track at the famed Indianapolis Motor Speedway — not only the teamwork demonstrated by students and faculty from curriculum programs at the college, but also by a team of sponsors from the community who supported them.

For the first time, VGCC sent a team to compete in an event as part of the GreenpowerUSA racing series supported by Siemens and the Sports Car Club of America. GreenpowerUSA is a national organization that promotes education in sustainable engineering and technology by offering challenges for schools based around designing and building a single-seat, electric-powered racecar. The series is open to middle schools, high schools, colleges and corporate teams. After the University of Alabama dropped out of this year’s GreenpowerUSA program, VGCC was the sole remaining college at the Greenpower Grand Prix at Indianapolis on May 1.

The Indy race followed a 10-week period of intense work by VGCC students to design, procure parts, manufacture parts and construct the car. After Mechatronics Engineering Technology students designed the basic layout, Welding Technology student Joshua Pfohl of Wilton, with assistance from classmate Jared Q. Siemers of Wake Forest, fabricated the frame of the car. From there, the Welding team worked with the Mechatronics students, including Jerry Pierce, Jr. of Stem, Thomas Boyd of Henderson, Kyle Painter of Berea and Charles Nordcliff of Creedmoor, to complete construction and start testing. The drivers for the team were recruited from among the VGCC student body. Driving the car and setting the driving strategy in the final race of the weekend were Jessica Baker of Wake Forest (a pre-Nursing/general education student), Alexa Clayton of Rougemont (Cosmetology) and Olivia Williamson of Oxford (Radiography). None of the students had raced before.

A number of local business sponsors joined to support the effort, including PowerSecure of Wake Forest, Charles Boyd Chevrolet Cadillac Buick GMC of Henderson, Vance County Tourism/East Coast Drag Times Hall of Fame, VanNess Chevrolet of Creedmoor, Duke Energy, Toyota of Henderson and Superior Tooling of Wake Forest. In addition, Action Graphics & Signs of Bullock affixed graphics representing the sponsors onto the sides of the car and provided some parts and expertise. The college’s Trade Adjustment Assistance Community College and Career Training (TAACCCT) grant funded many of the components and raw materials for the collaborative project.

The Greenpower Grand Prix at IMS featured 27 teams from the United States and Britain coming together to race. The Indy event included two 90-minute races over the 2.6-mile MotoGP layout, during which pit stops were conducted for two driver changes. VGCC’s car placed 21st in the first race and came in 13th in the second. At the finish of the second race, the VGCC car was the fastest on the track. “For that car to have never run a race before, show up and run two races without failing during either, and to finish 13th in the second race, is a phenomenal feat,” Shearon said. He added that the drivers achieved faster speeds than he had expected. Being at the enormous speedway, student Jerry Pierce added, was a “once-in-a-lifetime experience.”

GreenpowerUSA racecars are built to a specification that includes a single-sourced 24V DC electric motor and two specific 12V DC batteries that are meant to provide similar performance capability between teams, according to Shearon. Teams focus on the engineering problems of reducing friction, total driver/vehicle weight, increasing reliability, and improving aerodynamics. The largest technical challenges are chassis and bodywork design.

“The GreenpowerUSA program is a very good STEM catalyst,” Shearon said. “These projects promote science, technology, engineering and math to students through a hands-on experience as team members. GreenpowerUSA builds teamwork, releases creative energy and inspires confidence through personal achievement.” He added that the effort was “groundbreaking for VGCC, in the sense that we’re going way outside of our community and getting some recognition for our engineering and welding programs.” Shearon expressed his appreciation to the Welding and Mechatronics programs for collaborating so well, and to the local community sponsors for supporting the team.

Shearon said that the college plans to expand the program next year with more cars and hopes to encourage other local schools and colleges to compete. For more information on the TAACCCT grant program and participating in the next GreenpowerUSA project as a student, contact Zane Styers at styersz@vgcc.edu or (252) 738-3342 or Keith Shearon at shearonj@vgcc.edu or (252) 738-3256.