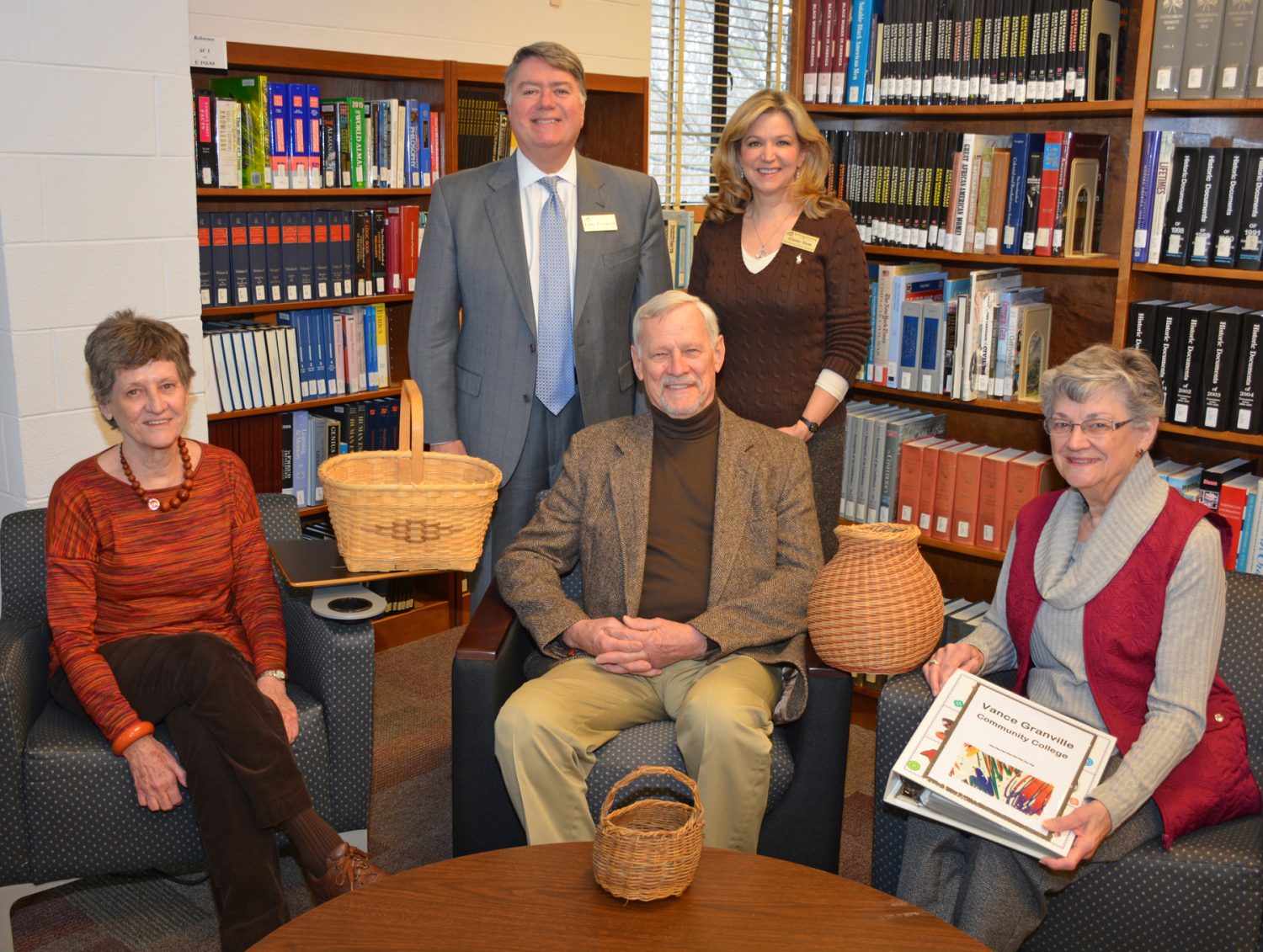 The children of a longtime Vance-Granville Community College instructor who qualifies as one of the “founding mothers” of the institution recently donated historical records and other items to the college library.

The late Frieda Bender Haun of Kittrell, who passed away in 2010 at the age of 95, became well-known in the community in part for the “personal enrichment” classes she taught at VGCC. Her involvement in the school started long before it opened in 1969, however. In 1965, Haun was appointed to what was then called the “Vance County Community College Steering Committee,” a group formed to research establishing a local two-year college and to gather support for it.

Documents related to that steering committee are among the papers and items that one of Haun’s daughters, Erika H. Rosenberger of Raleigh, inherited. She organized them and offered them to VGCC Director of Library Services Elaine Stem, to become part of the college archives. Stem noted that the items provide unique glimpses into the history of how the college was founded.

“Our VGCC Library scrapbooks only begin with 1969,” Stem said. “What is significant about this collection is that Mrs. Haun had documents dating back to May 6, 1965. The VGCC history book (‘Vance-Granville Community College: The First Thirty Years’) references the 1965 Steering Committee, and now we have some of those original letters.”

The earliest letter in the collection is from Emily Whitten, clerk to the Vance County Board of Commissioners. Whitten wrote to Haun, “Considerable thought has been given by the Board of Commissioners to the establishment of a Community College in Vance County…. We hope we can be in a position to request State funds for this project in the 1967 session of the Legislature. In order to be in this position, many things must be accomplished on a local level. Therefore, the Board has appointed certain citizens of the County to serve on a Community College Steering Committee…. You have been appointed to serve on this committee. We hope you will agree to serve in this capacity to help assure a Community College for Vance County.” Of the 36 people appointed at that time to the Steering Committee, Haun was among just five women.

“She was very proud of the opportunity to serve in that capacity,” Rosenberger said. “She was probably selected to be on the steering committee because she was active in the Kittrell community and people knew that she was interested in education.”

Haun was quickly chosen to be a member of a three-person nominating committee to select the leaders of the new Steering Committee. She was later appointed to serve on the “General Survey Committee.”

The steering committee later changed its focus to seeking a Technical Institute, when it became apparent that the state was not going to approve a community college in Vance County. Local leaders knew they could always seek community college status at a later date, which they eventually did. Haun continued serving on the steering committee to form a technical institute, an effort which succeeded in 1969. One record shows she was involved in discussions of where to locate the initial campus for the technical institute. “I think about the people she served with on the committee back in the 1960s, and I think they’d be pleased to see how the college has grown,” Rosenberger said. “It was just a dream back then.”

“She took advantage of every opportunity to learn and to pass knowledge along to others,” her son, Harold W. Haun, recalled. “She always aimed higher.” Proud of her work at VGCC, he and his siblings remembered that their mother was, for whatever reason, the only one of her siblings who did not have the opportunity to go to college. “But she often said that, despite that fact, she was the only one of her siblings who taught at a college,” Rosenberger added.

When Vance County Technical Institute was still fairly new, Rosenberger said, her mother enrolled to take a continuing education class. “Someone in the class said they would like to learn about chair caning or making baskets, and my mother knew how to do that. She had been teaching things like that for the Home Demonstration Club,” Rosenberger recalled. “So she approached the college in the early 1970s about teaching such classes, and they agreed.” Haun continued teaching arts and crafts classes for VGCC through around the year 2000, when she was 85.

In the 1980s, it became difficult for Haun to leave her ailing husband at home for extended periods of time. With the permission of college officials, she started holding her classes in the basement of her own home. “VGCC became a great vehicle for her,” Rosenberger said. “Having the ability to teach in her basement really enriched her life in her later years.”

Along with letters, the records Haun kept about VGCC included meeting minutes and newspaper clippings. In addition, Rosenberger and her siblings have donated some of Haun’s handmade baskets to represent her artistry. Haun made baskets and stools and was particularly adept at chair caning. A chair she made was selected to represent VGCC in the N.C. Community College System’s art exhibition and sat for one year in the office of Robert Scott, the former governor of North Carolina, then serving as president of the system.

“Our mother would be glad that the college appreciates her collection and delighted that all those clippings she kept will be maintained here,” said her daughter, Betsy H. Stuart. “I’m glad she’s being remembered in this way.”

“We’re so grateful to the children of Frieda Haun for thinking of VGCC and for preserving their mother’s legacy,” said VGCC Endowment Fund Director Eddie Ferguson. “The unique items they have donated will be invaluable to us as we prepare to celebrate our college’s 50th anniversary in 2019.”

Image Information: Seated, from left, in the VGCC Library are siblings Betsy H. Stuart of Fayetteville, Harold W. Haun of Raleigh and Erika H. Rosenberger of Raleigh, along with some of their mother’s handmade baskets and a scrapbook of materials their mother kept. Standing, from left, are VGCC Endowment Director Eddie Ferguson and Director of Library Services Elaine Stem. Another sibling, Veronika H. Marquoit, lives in New York State and was unavailable for the photo. (VGCC photo)