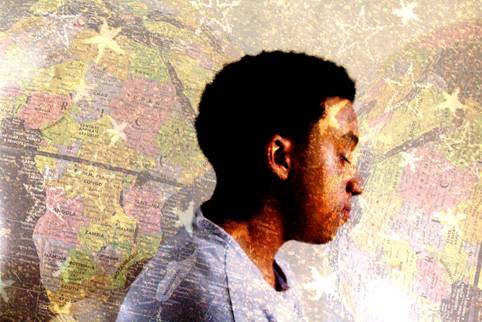 Leon Bradford, II, a Durham resident and senior at C.E. Jordan High School, took the top prize with his piece, “Shining Stars of the Universe.”  Leon’s piece will be displayed in the United States Capitol in Washington, D.C. for the next year and featured on the Congressional Art Competition website.  Leon will also have the opportunity to fly to Washington, D.C. in June for the national unveiling ceremony honoring winners from participating congressional districts across the country.

“I would like to extend my warmest congratulations to Leon,” Butterfield said.  “His piece is a testament to his creativity and commitment to refining his craft.  Each year, I am impressed by the exceptional talent displayed by the students who submit their artwork to this competition.  It’s clear that North Carolina’s students have a great amount of creativity and skill.”

Over 40 pieces of artwork were submitted this year with student-submissions coming from across the First District.  Winners were chosen by an independent panel of local artists and art instructors.

Since its inception in 1982, more than 650,000 high school students nationwide have participated in the annual Congressional Art Competition.

View all of this year’s art competition submissions here.