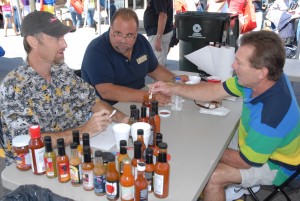 For several years, the Vance-Granville Community College Culinary Arts program has participated in the North Carolina Hot Sauce Contest by serving their own spicy treats to festival attendees. At this year’s event, the seventh annual contest held Sept. 14 in downtown Oxford, the VGCC Culinary department also took on the added responsibility of providing the entire team of judges.

It was up to the program’s two instructors, Chef Ross Ragonese (the program head) and Chef John Boretti, and students, including Jason Leonard of Oxford, Tom Schmuker of Creedmoor and Randy Wilfong of Henderson, to determine the winners of the contest, which drew dozens of entries from sauce-makers across North Carolina. These judges awarded a total of $4,500 in prize money to recognize hot sauces and barbecue sauces in a variety of categories.

“We were honored that the organizers of the contest selected VGCC Culinary Arts to judge the sauces, and we were proud that one of the winners happened to be a 2012 graduate of our program, Tracey Washburn from right here in Oxford,” Ragonese said. Washburn’s “These Hips Don’t Lie” Signature Sauce won for “Best NC Mild BBQ Sauce.”

While their classmates and instructors were challenging their taste buds to pick the winners, other Culinary students provided two dishes, both of which proved very popular with customers: buffalo chicken sliders with blue cheese drizzle and scallions, and Thai pulled pork eggrolls with a “fiery yum yum sauce.” Ragonese reported that his students achieved record-high sales of $1,170 “and, best of all, had a blast doing it.” He noted that participation in the contest, which attracts upwards of 10,000 people to Oxford each year, provides a unique level of exposure for his program, as well as real-world experience for the students.

VGCC’s two-year Culinary Arts degree program, based at the Masonic Home for Children in Oxford, prepares students for entry-level professional positions in food service and hospitality. For more information about the Culinary program, call Chef Ross Ragonese at (919) 690-0312