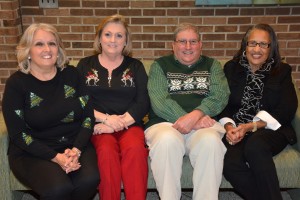 Vance-Granville Community College celebrated employees who had retired from the college — and particularly those who retired in 2015 — during a holiday social for faculty and staff, held on Dec. 17 in the Civic Center on the college’s Main Campus.

Dr. Stelfanie Williams, the president of VGCC, thanked all employees, past and present, for their dedicated service to students and the community. She called upon various college leaders to make presentations to their divisions’ newest retirees.

Director of Financial Aid Kali Brown paid tribute to two employees: Carolyn Ayscue, who served students in the Financial Aid Office for over 13 years, and Glenda Bowman, who was on the staff at VGCC for 18 years, most of those years in Financial Aid.

Dean of Arts and Sciences Cynthia Young saluted four longtime faculty members from her division. Phyllis “Button” Brady retired after 22 years as a Biology instructor. Wendy Frandsen served as a member of the VGCC faculty for 27 years, as an English and humanities instructor, as the first head of the Development Studies program, and later as program head for English. Both Brady and Frandsen were recognized as the college’s Faculty Member of the Year during their careers. Dana Jenkins retired as department chair and instructor for Mathematics after teaching at VGCC for 23 years. Biology instructor Philip Mondou was recognized for his 20 years of service as a faculty member.