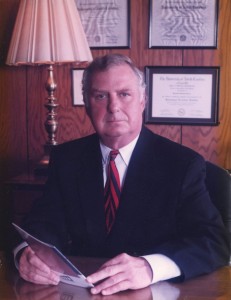 The State Board of Community Colleges recently selected Dr. Ben F. Currin, the former president of Vance-Granville Community College, to receive the highest honor the board can bestow, the I.E. Ready Award, for 2016.
?
Named for Isaac Epps Ready, the first state director of the North Carolina Community College System, the prestigious award was created in 1983 to recognize individuals who have made significant, statewide contributions to the establishment, development or enhancement of the System.
?
Currin, now retired and living in Raleigh, has contributed over 40 years of service to North Carolina, including serving as president of VGCC for 18 years starting in 1981.
?
Under Currin’s leadership, VGCC grew from one campus to four, with a total of almost $18 million worth of new construction at all campuses. During his tenure, VGCC also reactivated the college’s Endowment Fund, which grew from $12,000 in 1982 to $5 million at the time of his retirement and provided scholarships for numerous students. In retirement, Currin continues to serve on the Endowment Fund Board of Directors.
?
“Dr. Currin is regarded not only as a leader who made a significant impact on the communities served by VGCC, but also as a trailblazer who created a model of success for community colleges everywhere,” said Dr. Stelfanie Williams, the current president of the college. “His vision and innovation in establishing satellite campuses, building strong community partnerships and developing our scholarship program make him truly deserving of the I.E. Ready Award.”
?
A native of Granville County and a graduate of Oxford High School, Currin received his bachelor’s degree from the University of North Carolina at Chapel Hill in 1959. He earned his master’s degree in education in 1962 and his advanced graduate certificate in professional education in 1963, both from UNC. He received his doctorate in education from UNC in 1970 in education administration with a minor in political science.
?
Currin assumed the VGCC presidency after having served as a teacher, coach and public school administrator, including 11 years as superintendent of Rocky Mount City Schools. While in Rocky Mount, he also taught graduate courses at East Carolina University as an adjunct professor.
?
Currin earned high esteem from his peers in higher education. A University of Texas study in
1988-89 named him one of the “best of the best” among community college presidents across the nation, and he was given a National Leadership Award at the Leadership 2000 conference in San Francisco. He was also one of 75 participants chosen nationwide to participate in the Management of Lifelong Education Institute at Harvard University.
?
Deborah Brown, the current chair of the VGCC Board of Trustees, wrote in a letter of support for Currin’s nomination for the I.E. Ready Award that the college stood at a crossroads when he became its leader. “Dr. Currin took the right path through the crossroads and led Vance-Granville from a fledgling school into a powerful institution, demonstrating how rural colleges can deliver education to citizens effectively and efficiently,” Brown wrote. She also said he emphasized building the college’s public image and keeping VGCC on the cutting edge, both by introducing new training programs and incorporating new technology.
?
VGCC Board of Trustees member L. Opie Frazier Jr. also wrote a letter endorsing Currin’s nomination. The longest-serving trustee in VGCC history, Frazier chaired the board for many of the years in which Currin was president. “While I had only heard of Ben Currin prior to his coming to us as a candidate for president, I can say without question now that he was indeed a godsend for Vance-Granville,” Frazier wrote. “His greatest asset was his emphasis on students. The second was his enthusiasm. His successes are many – for example, the satellite campuses started under his leadership and the scholarship program that grew dramatically – because he wanted the best for students, and his enthusiasm helped him win friends at various levels to help him grow the college and serve more students.”
?
Currin received the Order of the Long Leaf Pine from Gov. Beverly Perdue. In remarks at the ceremony at which Currin was honored with that award, Dr. J. Reid Parrott Jr., retired president of Nash Community College, cited the positive impact Currin had on VGCC. “I want to tell you, I’ve been doing this community college stuff a long time, and there is no president of all 58 of our schools that has transformed an institution as quickly and as magnificently as Ben Currin did at Vance-Granville,” Parrott said.
?
After retiring from VGCC, Currin served on the state Charter Schools Advisory Committee for eight years and for a short period as interim headmaster of Kerr-Vance Academy.
?
Previous winners of the I.E. Ready Award include three former governors, three former state legislators, 14 former members of the State Board of Community Colleges, two former Council of State members, two former United States Senators, seven former college trustees, four former college presidents, four former System Presidents, two former System Office employees, and six former educators.
?
Only one other I.E. Ready Award recipient has been a VGCC official: the late John T. Church Sr. of Henderson, who chaired the college’s Board of Trustees and served in the General Assembly.
?