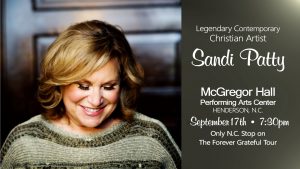 Legendary contemporary Christian artist Sandi Patty is set to perform at the newly opened McGregor Hall Performing Arts Center in Henderson, N.C., on September 17th at 7:30 p.m.  The event will be Sandi’s only North Carolina stop this fall on her worldwide farewell tour that celebrates her latest album “Forever Grateful.”

Sandi is the most awarded female vocalist in contemporary Christian music history with five Grammy awards, four Billboard Music Awards, three platinum records, five gold records, more than 40 Dove awards, and 12 million units sold. Sandi was introduced to the world with her rendition of “The Star-Spangled Banner” during the rededication of the Statue of Liberty in 1986. Virtually overnight she became one of the country’s best-loved performers. Among her proclaimed concerts, Sandi has performed during three separate Presidential Inaugurations as well as at the Macy’s Thanksgiving Day Parade.

“What a privilege it has been to share my story and faith through song for so many years,” Sandi says. “My heart is full of gratitude for so many who have been along this journey with me. I could never have imagined my career taking me to so many amazing places and meeting so many people who have changed my life forever. My desire is to use this next season and the ‘Forever Grateful’ tour as an opportunity to say ‘thank you’ to as many people as possible.”

As part of her farewell tour, Sandi will feature songs from her newly released album “Forever Grateful” as well as special guests Veritas, an Inspirational Music group, and performances from members of her family. A portion of the proceeds from the tour will also be donated to World Vision, the international children’s support organization.

“Sandi is not only a legendary Christian artist, she is a worldwide humanitarian,” said Tommy Deadwyler, executive director of McGregor Hall Performing Arts Center in Henderson. “We are honored that she has selected Henderson’s new performing arts center for her Forever Grateful farewell tour and will be able to share her inspiring messages of faith and hope to our community.”

Sandi Patty will perform at McGregor Hall Performing Arts Center on September 17th at 7:30 p.m. Tickets are on sale at www.McGregorHall.org, by calling (252) 598-0662 or by visiting the Box Office, Tuesday – Friday  1pm – 5pm, at 201 Breckenridge Street in Henderson, N.C.