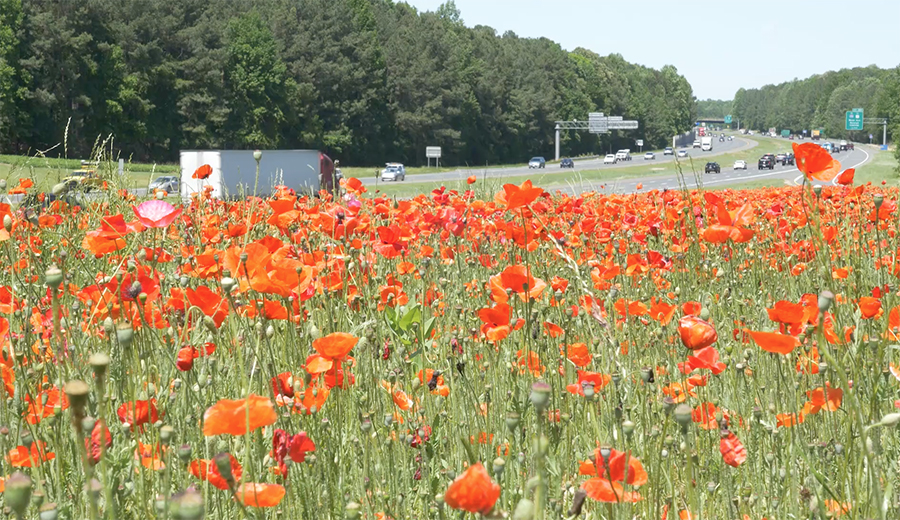 Red poppies are blooming along highways in North Carolina in commemoration of the centennial anniversary of the U.S. entry into World War I and in memory of servicemen and servicewomen killed during the war.

The state departments of Transportation and Natural and Cultural Resources collaborated on the project as part of North Carolina’s commemoration of the 100th anniversary of the country’s official entry into World War I in April 1917.

“We are so grateful to Secretary Trogdon and the staff at NCDOT for partnering with us on this beautiful and visual remembrance of the North Carolinians who gave the ultimate sacrifice in serving their country 100 years ago,” said Susi H. Hamilton, secretary of the N.C. Department of Natural and Cultural Resources. “These flowers are a wonderful way to honor the memory of our World War I veterans, and I hope that people who see them will be inspired to reflect on those who died in service to our country.”

“We are honored to pay tribute to the men and women who served our nation in World War I through our department’s most popular program,” Transportation Secretary Jim Trogdon said. “Thank you to the many veterans who sacrificed on our behalf a century ago and to Secretary Hamilton and the N.C. Department of Natural and Cultural Resources for helping us make this beautiful memorial a reality.”

NCDOT’s Wildflower Program, which began in 1985, is an integral part of highway beautification. Wildflower beds are installed and maintained across the state by Roadside Environmental personnel in each of the 14 highway divisions.

The red poppy is the official emblem of remembrance of the American Legion, and has been used as a symbol to commemorate war dead since World War I. It was inspired by the opening lines of Canadian Army officer John McCrae’s poem “In Flanders Field,” which was written during World War I after McCrae noticed the poppies blooming around the mass graves of soldiers on the battlefields.

North Carolinians served in all the major battles of the Western Front in 1918. They fought in the battles of 2nd Marne, St. Mihiel, and in the Meuse-Argonne, the last major campaign of the war. As part of the British army, Tar Heels in the 30th Division fought in Belgium and France in intense combat. In only five months of action in 1918, the United States suffered more than 275,000 casualties with more than 50,000 deaths. Nearly 2,400 North Carolinians died during World War I from battle and disease.