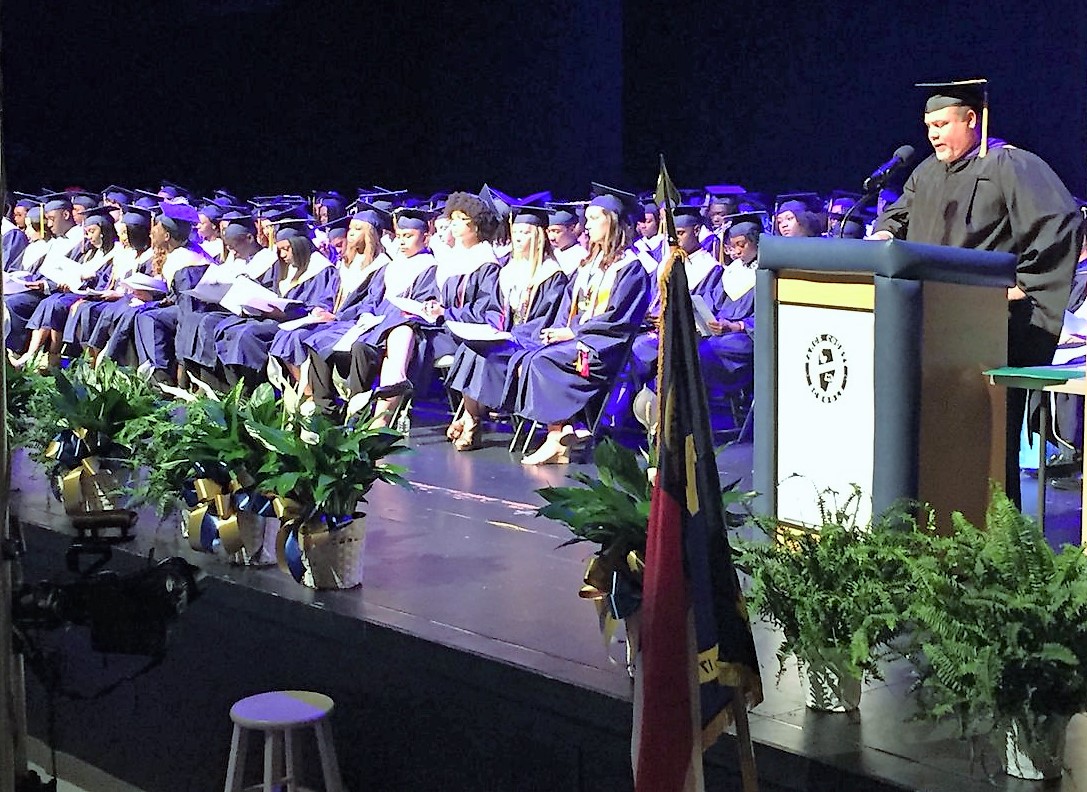 Members of the Class of 2018 at Northern Vance High School received deserved recognitions during their Commencement Exercises held in the afternoon of June 9 at McGregor Hall in Henderson.

Every seat was filled in the almost 1,000 seat auditorium as family members, friends, educators and school system officials joined in paying tribute to the last graduating class of Northern Vance High. An overflow crowd of about 300 watched via live stream on large screens set up in the McGregor Hall Gallery.

There were 177 members of the graduating class. They were awarded $4.9 million in scholarships to attend college and further their educations. The vast majority will go on to attend a community college or a four-year college or university. Some graduates have chosen to join the military and some will move directly into the workforce.

The seniors, all wearing their dark blue caps and gowns with a white, collar sash trimmed in gold, processed into the auditorium as the audience stood in recognition of their achievements.

Once the graduates were in position on the stage, members of the Vance County Air Force Junior ROTC Color Guard presented the colors. Graduating senior Jadyn Jones sang the “National Anthem.”

Clara Bobbitt, who finished number one in the graduating class academically, provided the valedictory address for her classmates. She spoke about their four years of hard work and accomplishments at Northern Vance and their hopes for going on to continued success in college and their future careers. Erin McAllister delivered the salutatorian address in recognition of her completion as the second highest academic achiever in the class.

Markoch led the presentation of diplomas to each of the graduates. The seniors lined up to the left of the stage and walked across to receive their high school diplomas. Joining Markoch with the presentations were Superintendent Anthony D. Jackson, Vance County Board of Education Chairwoman Darlynn Oxendine and Assistant Superintendents, Jennifer Bennnett, Trixie Brooks and Cindy Bennett.

Image Information: Assistant Principal Mark Lawhorne welcomes everyone to the Commencement Exercises for the Class of 2018 at Northern Vance High School