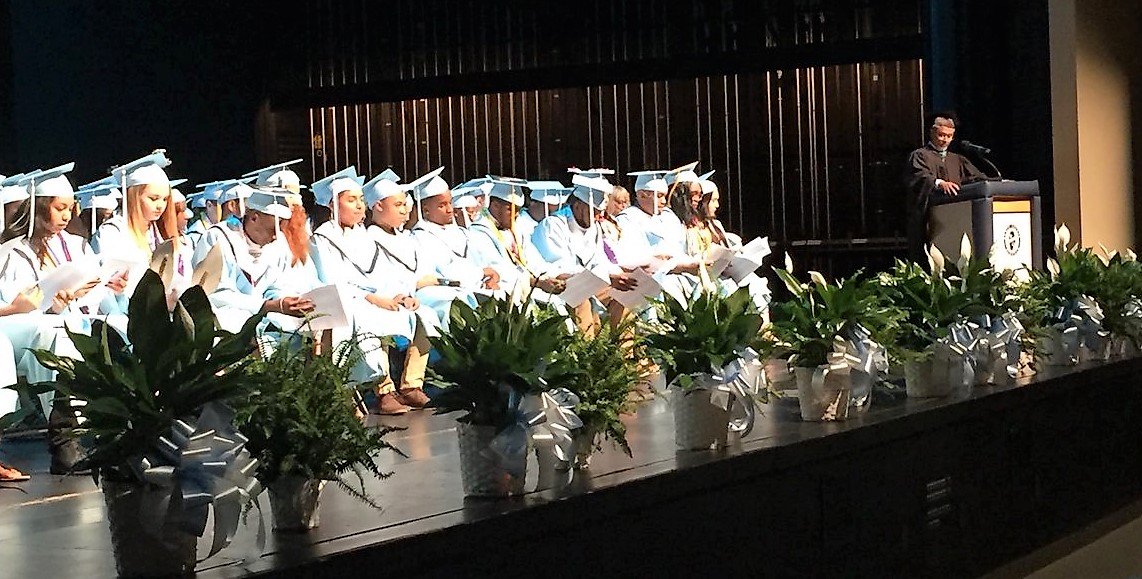 The final graduating class of Southern Vance High School, with 169 seniors, received high school diplomas on June 9 during the school’s Graduation and Commencement Exercises held in the morning at McGregor Hall in Henderson.

Principal Rey Horner led the proceedings as he watched his graduates march into the auditorium, which was packed with almost 1,000 parents, siblings, other family members, school staff members, school system officials and community residents. Horner congratulated the seniors for their achievements and urged each of them to go out into the world and make a real difference.

Itzy Chavarin Contreras was the class valedictorian. She gave a very emotional speech to her classmates and those in the audience. She took the time to especially thank her father for his influence and work in helping her to achieve what she has achieved so far in life.

Itzy Chavarin Contreras delivers the valedictory address on behalf of her fellow graduates.

The class salutatorian was Crystal Marrow.

After all of the graduates processed into the auditorium, the Vance County Air Force Junior ROTC Color Guard presented the colors. Jykira Benson, a graduating senior, sang the “National Anthem.”

Each graduate’s name was announced and they walked across the stage to receive their diploma. The diplomas were presented by Horner, Superintendent Anthony D. Jackson, Vance County Board of Education Chairwoman Darlynn Oxendine, and Assistant Superintendents Cindy Bennett, Trixie Brooks and Jennifer Bennett.

The Class of 2018 at Southern Vance has accepted a total of over $2 million in scholarship funds to attend colleges and universities in the fall. Most of the graduates will go on to further their education in a community college or two-year or four-year college and university. Some of the graduates plan to enter the military and a few will go directly into the workforce.

Image Information: Principal Rey Horner stands at the podium as he addresses the Class of 2018 at Southern Vance High School and the audience at the Graduation and Commencement Exercises.