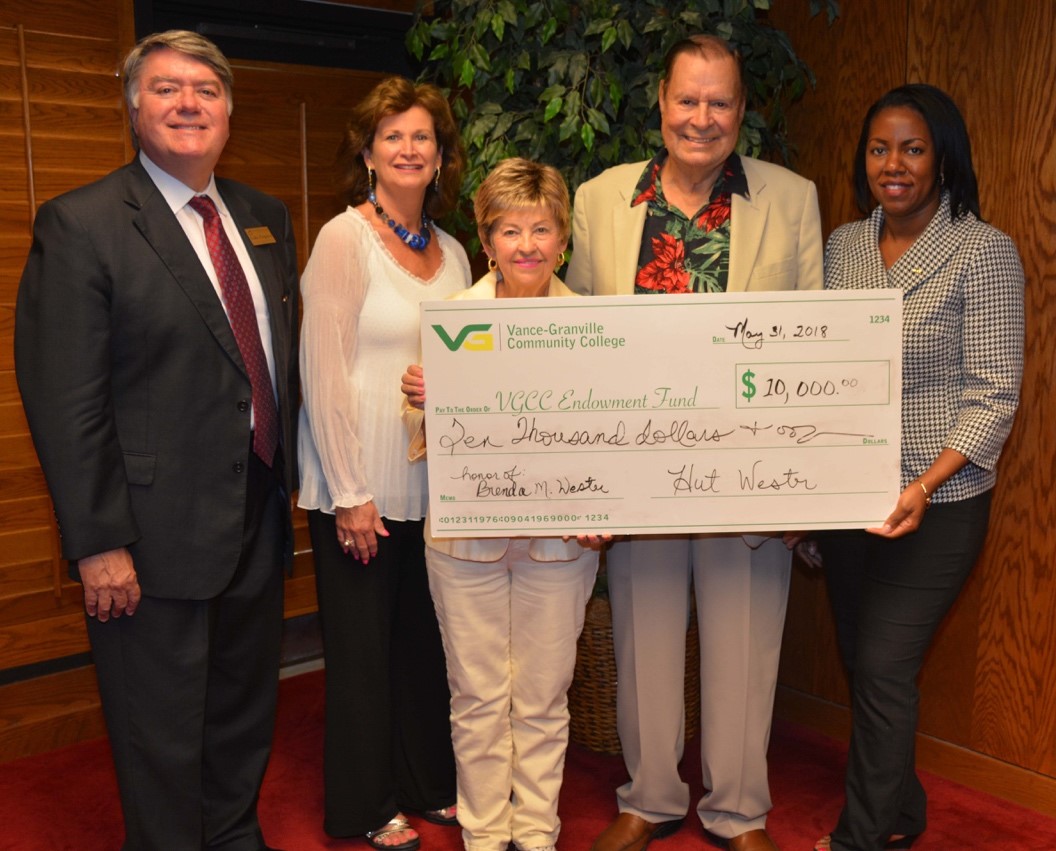 Hutson Wester of Henderson recently made a donation to the Vance-Granville Community College Endowment Fund to create the Brenda McGee Wester, R.N., Academic Achievement Scholarship in honor of his wife.

Brenda McGee Wester retired after 30 years as a Registered Nurse in 2005, having worked at Duke Raleigh Medical Center and Wake Medical Center as well as spending a portion of that time in State government. She received her Associate Degree in Nursing from Johnston Community College and is considering enrolling into a Bachelor of Science in Nursing program at a four-year institution, she said.

Mrs. Wester said her career in Nursing was sparked by her mother’s interest in helping neighbors in the McGee’s Crossroads community while growing up as one of six daughters on a 100-acre tobacco farm in Johnston County. “My mother, Lillie McGee, was the one that they called on when a mother was having a baby,” said Mrs. Wester. “My mother was a nurse by what came natural to her,” serving as a midwife in addition to providing loving care to members of her family.

“I know what it’s like to come along and want to be a nurse, but some students can’t afford to go to college,” said Mrs. Wester. “Having a scholarship available will help them be able to make it. That means a lot to me.”

In awarding the newest scholarship, preference will be given to students enrolled in eight or more credit hours in one of the college’s Nursing programs. A minimum grade point average of 2.5 will be required. VGCC offers Associate Degree Nursing, LPN to ADN Transition, RIBN (Regionally Increasing Baccalaureate Nursing) and Practical Nursing among its Health Sciences programs.

“I think Vance-Granville is one of the best things that ever happened in our four-county area,” said Hutson Wester. “I’ve seen what the college has done since the very beginning when it was located in the former Maria Parham Hospital building on Chestnut Street in Henderson.”

VGCC President Dr. Stelfanie Williams voiced her appreciation of the new scholarship. “Students who are preparing for careers in Nursing have a new source of support, thanks to the generosity of Hutson Wester. This scholarship, like those he started earlier, are so essential in helping us meet our mission of educating, inspiring and supporting our students.”

Eddie Ferguson, director of the VGCC Endowment Fund, added, “Hutson Wester has been such a strong supporter of the college — in the classroom, in the community and also on the golf course as a regular participant in our annual Endowment Fund golf tournament. He has chosen a meaningful way to honor his wife.”

The new scholarship will add to the more than 9,000 scholarships that have been awarded to students since 1982, funded by interest earned on the Endowment Fund and Scholarship Program. Scholarships have been established by individuals, industries, businesses, civic groups, churches and the college’s faculty and staff to assist deserving students. Tax-deductible donations to the VGCC Endowment Fund have often been used to honor or remember a person, group, business, industry or organization with a lasting gift to education. In the Fall of 2017, Vance-Granville awarded scholarships to 306 students.

For more information, the Office of the Endowment can be reached by calling Endowment Specialist Kay Currin at (252) 738-3409.