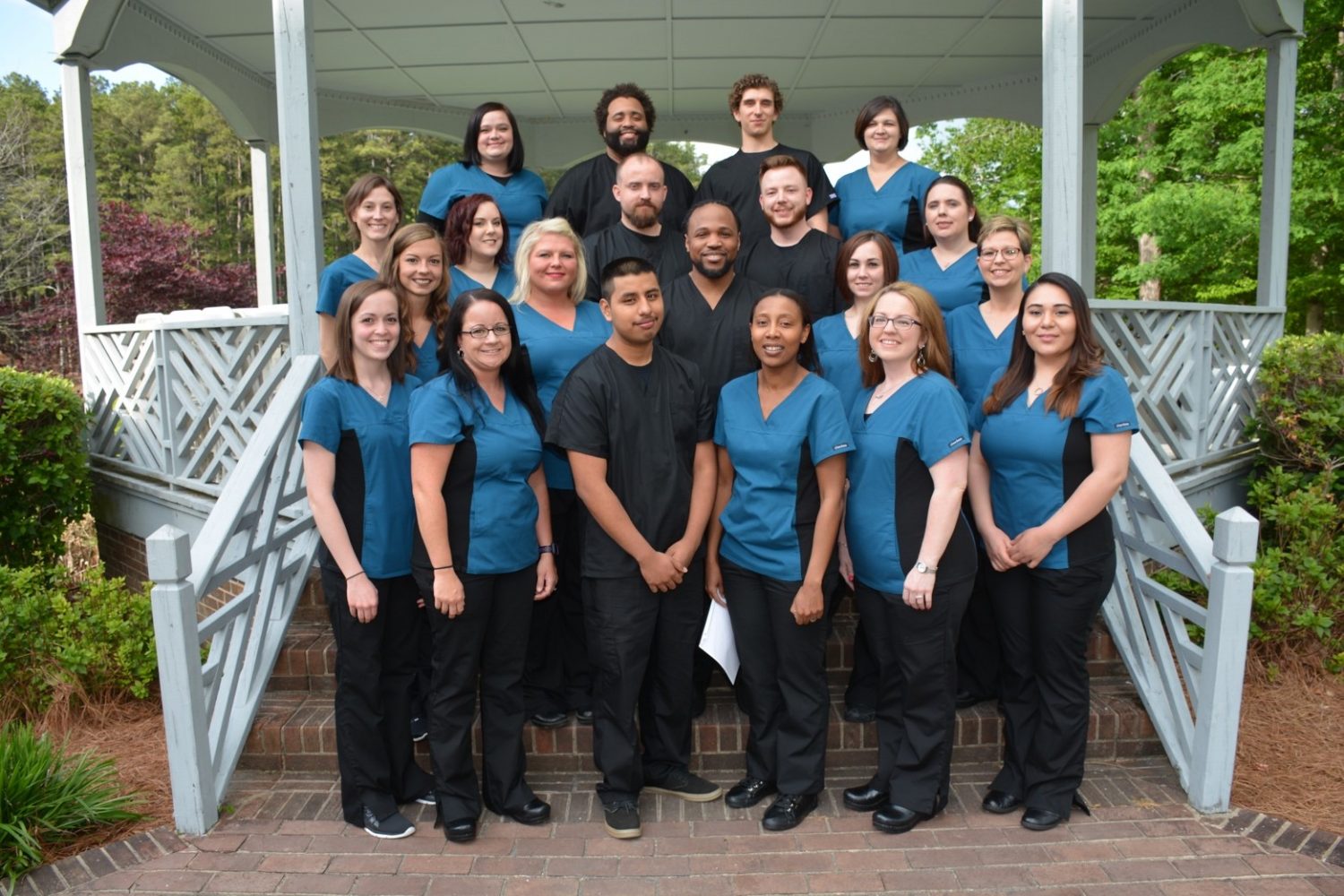 Twenty new graduates of Vance-Granville Community College’s two-year Radiography program were honored in a May 7 pinning ceremony in the college’s Civic Center.

In his remarks to the Class of 2018 as keynote speaker, John Douglas Britton II, a vascular interventional technologist at the Veterans Administration Hospital in Durham, urged the graduates to “aim high” but “never forget your roots.” A 2015 graduate of VGCC’s Radiography program, Britton added, “It’s important to set goals for yourself. To aim high is to work towards significant rewards along with personal and professional satisfaction.”

Keynote speaker, John Douglas Britton II, who is a vascular interventional technologist at the Veterans Administration Hospital in Durham.

“It’s also important to remember who you are, where you’re from, where your roots are and realize that honoring your foundation will insure that you live a grounded, meaningful life — one with purpose,” he said. “The gift of heritage comes with a responsibility to share, inspire, spread the word and teach others as you have been taught.”

Britton was chosen by the graduating students to receive the Joint Review Committee on Education in Radiologic Technology (JRCERT) Certificate of Excellence for Clinical Educators, presented at the ceremony by Stacey Soles, VGCC’s clinical coordinator for Radiography.

Receiving the JRCERT Certificate of Excellence for Students was Aaron McNeill, with the award presented by instructor Lewis Daughtry, Jr. A special recognition was also made to McNeill by Soles for perfect attendance in the clinical education classes during the entire 21 months of the program.

The students voted for Tabitha Owens of EmergeOrtho as the top technologist at the clinical sites in which they received their 900 hours of practical training, while the Clinical Affiliate Award of Excellence went to the Granville Medical Center Radiography Department. Both awards were presented by instructor Anthony Twisdale.

In welcoming remarks, VGCC Vice President of Academic Affairs Dr. Levy Brown congratulated the graduates, welcomed them to the imaging profession and encouraged them to “Go confidently in the direction of your dreams and live the life you’ve imagined.”

Dr. Brown shared some information about the diverse class, noting that nine of the 20 graduates had been raising children during their studies and 12 had earned Dean’s List or President’s List honors. Seven have already accepted employment opportunities in their new careers, and 10 of them have been accepted into educational programs to diversify their skill set within Radiography, including CT, MRI, nuclear medicine and radiation therapy. Others have plans to concurrently take classes to obtain their bachelor’s degree at four-year institutions.

The class drew strength from working together as family, VGCC’s Dean of Health Sciences Angela Thomas said. “With the realization that you cannot make it on your own, you decided to embrace and display the real meaning of family,” she said. “This gave each of you the unlimited ability to improve the quality of what you have to offer and then you all gradually began to strive to do better as a unit…. Today, your journey continues as you transition from my students to my colleagues — colleagues with whom I can say that I trust to work as well as to take care of my loved ones.”

As class representative, Terrance Mario Wesley spoke on behalf of his classmates. He shared comments about each of his fellow graduates and his program instructors and clinical instructors. Describing his instructors as being “the best a student could ask for,” he added, “I would like to thank you all for imparting wisdom, believing in us, and being an awesome example for us.” Wesley said. He closed with a quote from his childhood mentor as encouragement to graduates and the next class of radiographers: “Good, better, best — never let it rest until your good is your better and your better is your best.” Wesley also gave the invocation and benediction.

A Flickr album of photographs from the pinning ceremony is available at https://www.flickr.com/photos/vancegranvillecc/albums/72157696458718574.